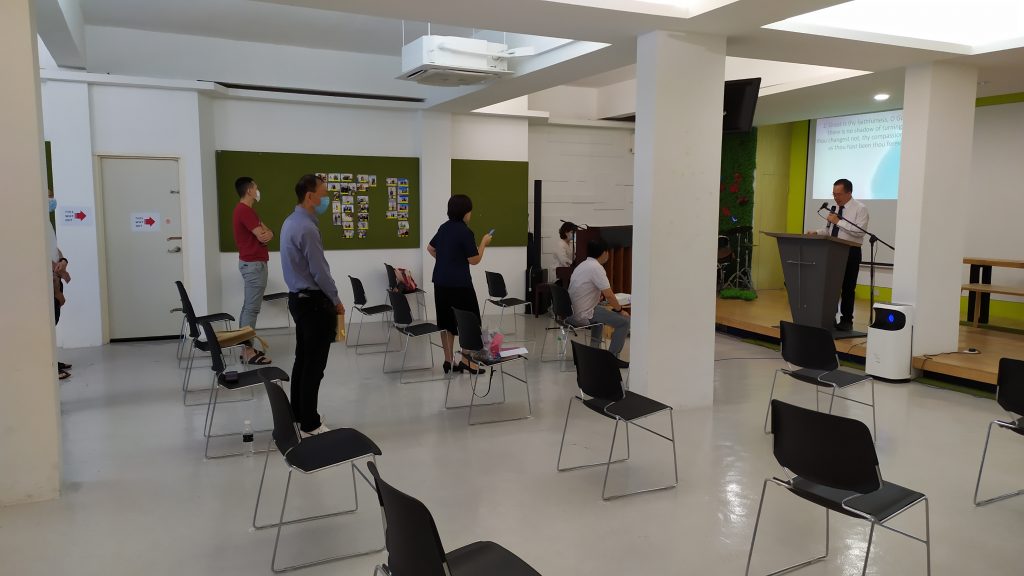 Indeed I thank God for raising up people who answered the call to serve in this ministry in such a short time.

Was contacted by Elmund on the 6th regarding the streaming license, and so I asked him how will his set up be like. Initially their first plan was to do pre-recording of the whole service that was supposedly to be premier today，but after a long discussion from what I was told they wanted to go live.

He thought of using his mobile phone and go stream directly from there. I told him that won’t be an issue, but he needs to consider about his slides as well as audio might not be clear. So I told him if he could find an old camcorder, I could give him my capture card they should be able to go live already. On the 8th he managed to get a camcorder from a church member, and he dropped by my place to collect this capture card. He didn’t have the av cable for his camcorder, so I also ended giving mine for him to use while guiding him how to set up the connection. As well as getting him to use the YouTube account to activate the live feature as it requires 24 hours in order to be activated.

No doubt Elmund was having fun setting up and testing out the equipment till late at night, I must admire his determination. He wanted to ensure that all was working well before calling in backup. So far he was able to set up the video but having issues with his audio. He pretty much tried everything already, but to no avail. So I got him to send me the model of his mixer as he started to get ready to leave.

10th August after going through the reviews on his mixer, and discussing with him we found out what went wrong with his set up. So he went and updated the chart above, and technically his audio issue should be resolved already. So I contacted Frederick and checked with him if he was able to help out with the live streaming he said he’s ok. Also got him to purchased a few things for him to bring over to Elmund for the set up that night.

So at around 9 PM, I got a text from Elmund saying he has issues trying to capture the desktop view. I told him that this is due to the on board Nvidia graphics card, and asked him to disable it via the device manager and that was the last issue they finally resolved. Audio also no problems already, and Fred who bought the USB extension was able to prop the camera in position ready for Sunday. So what is left right now is for Elmund to go back and learn how to use OBS, and they will have a final rehearsal on Saturday before going live on Sunday.

14th August, halfway during CG I had to excused myself to attend a trial run with Agape Grace Methodist Church as they will be hosting a webinar the following day. So after seeing them going through the whole process and do some minor tweaking to their settings they are all good to go.

15th August, in the morning I messaged Fred to see if he’s available so that I can guide him on how to create and manage the landing page. And after going through with him, he’s basically a pro already. So now Living Hope will have a centralized place to ease the congregation to access the live stream.

So in the afternoon, the team was doing the final rehearsal as well as setting up the proper scene in OBS. When using a camcorder that has image stabilization it needs to be switched off. We had this issue as well during Good Friday live stream where the camera was shaking despite nothing was touching it. Then I recalled a friend of mine who once mentioned to me, that if I mount a camera on a tripod with image stabilization on it will shake. Once he switched it off, the shaking disappeared and they managed to go through the whole flow without any issues. All this happen the same time when John wanted to try out something in FMC, so basically their rehearsal was streamed via zoom in FMC. Hence killing 2 birds with one stone, as we needed to test out the streaming quality on the 8th next month.

At night was the webinar as I was more of a supporting role while AGMC ran the whole thing. Everything was ok, but unfortunately Rev. Hii had issues with his connection in UK. Never the less, everything went well and I told them there will be some thing we won’t be able to control. Our only solutions is through prayer, and that’s the best we could do. Never the less, told them we live, we learn, we move onwards to a better streaming experience.

16th August, so I decided to drop by to show my moral support before they went live. After some final adjustment to their broadcasting station, and giving some final minute pointers they were all good to go. Elmund got too excited and accidentally started the live stream way too early, but told him it’s all good and not to worlry about it. Once they’ve started, I just observe and make sure all the audio and video are working it’s time for me to head back to FMC and proceed with my work there.

All the believers were one in heart and mind. No one claimed that any possessions was their own , but they shared everything they had. – Acts 4:32

Someone asked me if I was paid to do all this, and I simply told him no. Am I obligated to do it, I told him no. Why am I doing it? Well the answer is from the Bible verse above, what God prepared me for all these years is to be shared with others. My role is probably an encourager, as all the hard work is done by the IT team from each respective churches. And whatever problems they faced today were the same problems we faced during the earlier months while doing live streaming. So in short, I do not own anything, but whatever mistakes and experience I went through is meant to be shared with others. As we are all united in the body of Christ. So what’s next after this? For all I know, the work here may be finished, but I believe God has more work in-store for me. Am I tired from all this, to be frank Yes. But the joy from seeing each team able to successfully pull off their stream is the best thing I could only asked for. Seeing 1st hand how God was able to raise a group of people with no experience to be fully utilise them in a way none of them would have imagined.

So in short, you don’t need to be a professional to do anything for God. If you are willing to allow God to use you, you’ll be surprised how far he’s going to bring you. Anyway, that’s all for now. I’ll see you guys in the next one.