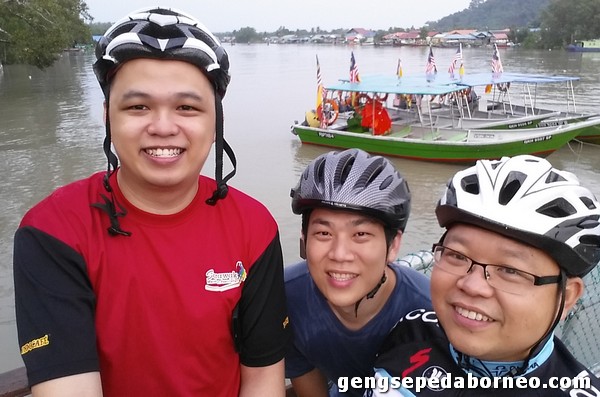 I know I have not been updating my rides as of late as I was busy sorting out a new website that I’ve been working for dedicated to cycling with a few of my friends.  As most of you may have known it’s Geng Sepeda Borneo.  Currently I’m still not sure should I do a double entry for it or just from one site to another.  Anyway, here’s the posting I did for this trip last week.

KUCHING : After a week break from their previous Siniawan trip, Genesis Riders decided to ride on towards Bako. They met up at Klinik Kesihatan Tanah Putih, and proceed from there towards Bako via Kampung Bintawa Tengah, through Jalan Demak and from there proceed onwards using Jalan Bako. After riding for about 1.5 hours with an average speed of 15km/h, they finally reached Bako Terminal. Here they spent a few moments looking around hoping to grab something to eat, but unfortunately most of the stalls were not open yet.

While it was still early in the morning, they decided to head over to Muara Tebas to explore what they can find there. No doubt the long strech was indeed breath taking, with not many cars just 3 cyclists and nature. Upon reaching Muara Tebas, they went and parked at the famous Muara Tebas Temple and rested a few minutes before deciding to head over to the nearby restaurant. After taking some more photos, and refueling with fried bee hoon it was time to head back to Kuching.

As they were about to leave the restaurant, they came across father and son team who were also cycling that morning. Despite not knowing them, we exchanged greetings and began their journey heading back. 15 minutes after turning out to Jalan Bako, a group of cyclist were heading the opposite direction which was an amazing site to see how synchronized their speed was with one member leading the pack.

As they were approaching Sejingkat one of the riders got his tire burst. And unfortunately, all of them did not bring any spare tube or pump despite previous week one of their members also got his tires punctured. After making a phone call, the rider managed to get home while the other 2 continued their journey back to Kuching via BCCK route.

Overall it was a good ride, as there were not many hills to climb (not counting the bridge) and all of them learnt their lesson that they should bring a spare tube with them.