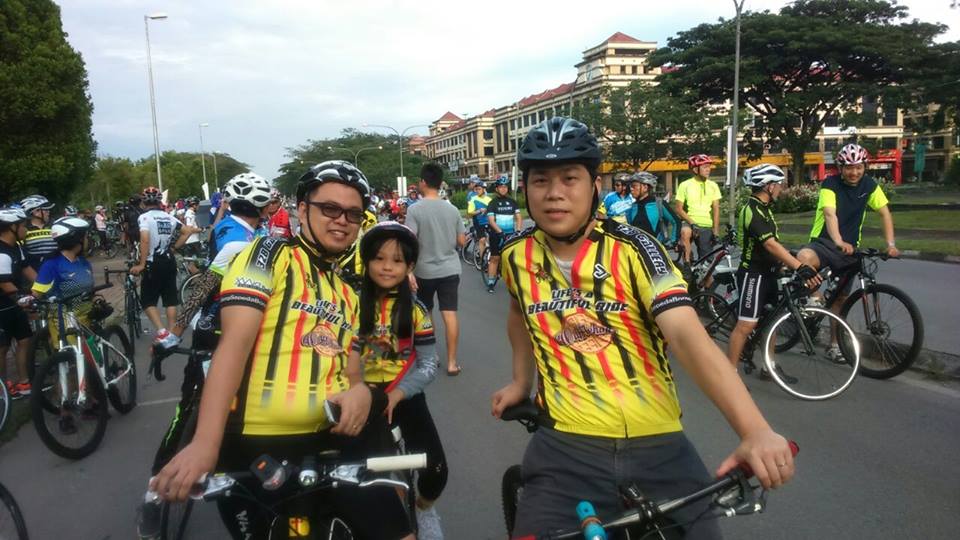 Today I had the chance to bring Princess E out once again in one of our many adventure.  Unlike previous ride which were about 20KM at most, this time we were riding about 45KM which includes the trip to and fro from home to Boulevard, as well as the route that was prepared by Boulevard.

It actually posed a challenge for me, as Mat also pretty much knew my limitation.  Never the less we woke up about 5.30 in the morning to get ready for our adventure.  Not knowing what we were up against we proceed towards Boulevard from town on our bicycle.  The air was cool as we start our journey, but fortunately for Princess E I was able to find arm warmers for here while I was in Sibu months back.  We first arrived at Yes Cafe as we thought it was still early.  Never the less, we wanted to take a quick bite but Eng Gek stated we need to head over soon.  So I gave Princess my energy bar while I gulped down the milo she didn’t managed to finish.

Upon arrival, we saw a mass of cyclist waiting at the starting line.  So I went and proceed to registered then managed to meet up with Mat who was at the back of the line.  Then it wasn’t long before the flag off started, so we began our journey.  The initial part was a little bit messy as, it was crowded for one reason.  But fortunately for us we had proper escort leading the way, and of course things got complicated when people got a little bit impatient due to the fact there were about 5-600 cyclist on the road which caused a massive jam.  Initially we managed to stay on 1 lane before proceeding cycling in a single lane.

Fortunately for me, Mat was behind me making sure I managed to finish the route.  As he managed to gave me a boost each time there was a slope coming up.  And we managed to reach the first pitstop in good time.  The extra weight was a challenge, but never the less. It was good that we were able to take a rest for a while.  Anyway, the rest of the journey went well and we managed to finish the whole route instead of turning back like what I did previously.

Overall it was a good experience for Princess E, who was able to cling on for over 4 hours.  And hopefully it will help her balance, cause after that it’s off with her training wheels and for her to start riding without it.  Will take some time, but hopefully once everything sets in. She’ll be riding on her own instead of piggy back me.  We’ll see how it goes.

You’re Welcome Moana Duet Cover By Princess E and Me